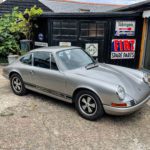 Matching numbers car, originally registered to Mr Herr of Collinsville, Illinois. From the original service book it appears it was then sold to Mr Hugh in 1976 who resided in neighbouring Springfield, where the car remained through the late 1970s and 1980s, presumably with Mr Hue before changing hands again. More recently in August 2013 the 911 was purchased by a gentleman from Wilson Motor Company in Washington and due to his line of work the car was shipped over to the United Arab Emirates. Whilst in the UAE the owner maintained and recommissioned the car for his personal use and invoices from Deutsche Technik in Dubai, amongst others are contained within the history for along with invoices for new brakes and dampers.

In 2015 the he decided to ship a car back to his UK residence in Berkshire, partly to utilise the experience of specialists Autofarm. A full inspection and major service followed to the sum of £4785.

More recently in 2018 Matthew, a close friend of Ritchie, purchased the car. He’s had it maintained with our mechanic. He has used it fairly frequently and it’s been a good car for him. When not in use it’s been in dry storage.

There are no reviews yet.

Sunday  Closed (By appointment only)

Designed & Hosted by IT Positive Ltd

No products in the cart.